Faculty of MedicineThe HIVE | Hackspace for Innovation and Visualization in Education 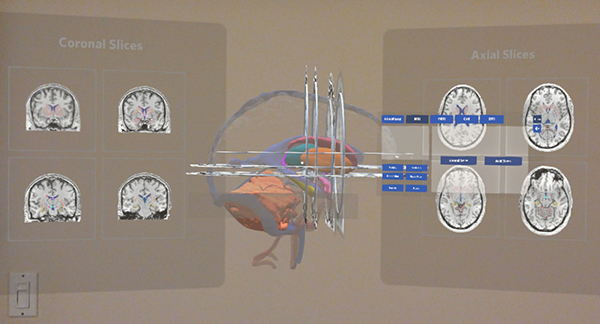 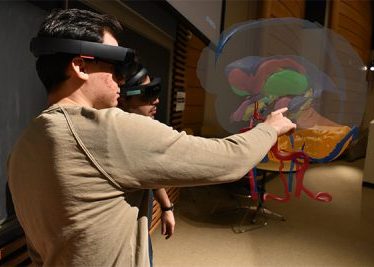 The HoloBrain is an Augmented Reality (AR) teaching tool that was developed for the HoloLens in collaboration with the Microsoft Garage Internship programme. The HoloBrain uses 3D volumetric reconstructions from an MRI scan. The “education room” is organized by neuroanatomical systems and users can easily add and subtract structures and features in a dynamic way. A separate “MRI room” allows for direct correlation of the 3D reconstructions with the 2D MRI scans. These two features are a unique asset for student learning. Two research oriented rooms allow for the 4D visualization of fMRI data – a unique approach to the visualization and interpretation of these complex datasets. We also were able to visualize 4D cell motion datasets.
Tech: Unity | Microsoft Hololens 1

In response to Covid19 we developed a methodology that allows us to easily record and broadcast a HoloBrain lesson. The SpectatorBrain is an app that synchronously mirrors the visualization of the HoloBrain with a Hololens on a mobile device for recording and broadcasting. This allowed us to record HoloBrain lessons and make them widely available for students. The functionality of the Spectator Brain will allow students to synchronously see the HoloBrain on their own devices in a live lecture when we’re all back together on campus.
Tech: Unity | Microsoft Hololens 1 | Spectator View

The HoloBrain project will be upgraded using Hololens 2 with Microsoft Mixed Reality Toolkit (MRTK). With this new technology, students can experience new ways to touch, grab and isolate brain structures. We look forward to developing an augmented-reality neuroanatomy lab at UBC with the Hololens 2 and Azure Spatial Anchors, that students will be able to access any time to study with 3D virtual specimens.
Tech: Unity | Microsoft Hololens 2 | Mixed Reality Toolkit (MRTK) | Azure Spatial Anchors | Spectator View